Hanoi, the Paris of the East

As posted by Helen:

An overnight sleeper train [which we shared with two young men one of whom had a juicy cold and no Kleenex to contain it - get the picture?] pulled into the Hanoi train station around 4 a.m.  Down onto the platform we came, bags in tow, into a waiting crowd of eager taxi drivers waiting to overcharge - not one would bring us to our hotel via a metered fare - they wanted some flat rate which would have cost way more [scammers!].  We had to exit the station to find an honest one.

As we pull up to our small hotel in Old Town, it is in total darkness [it's only 4.30 a.m.].  However, within seconds the door is unlocked, lobby lights are on and we are welcomed by two bellboys who have been sleeping on the lobby floor.  Our room won't be ready until noon [the normal check-in time] they tell us, but in the meantime we can use another room without charge.  Wow!  We can't believe our luck and within 10 minutes we are sound asleep.  The welcome we got at the hotel made up for the hassle at the train station.


Hanoi is the capital of Vietnam and the country's second largest city - about 6.5 million for the metropolitan area.  It has a long and complicated history during which it was occupied by the Chinese, Japanese and the French - therefore. a fascinating blend of East and West.

After a great four hour sleep, we are ready to discover Old Town.  It is a maze of 36 narrow streets (no two streets seem to meet at 90 degrees).  I would have been lost many a time, but thanks to Ingrid's previous visit and proficiency at map reading we are having no problem finding our way!

Hectic, noisy and chaotic best describes the atmosphere.  Scooters, bikes, cars and people crowd the streets which are pulsating with life.  As a pedestrian walking on the street you have to be on your toes at all times.

There is no room on the sidewalks which are just as chaotic and taken up with parked scooters, locals staking their spots with small plastic stools from which they sell food, clothes, and anything else you can think of.  In a picture below a gentleman has set up his knife sharpening shop.

﻿﻿
﻿﻿
Despite the damages the Vietnam War left in Hanoi, the old quarter was left virtually unscathed and its architecture is represented by "tubular" houses which are short and narrow but have great length.  The front of the house is the store whch is jam packed with things to sell so much so that the merchandise spills out onto the sidewalk.  Behind the store, the length is separated into manufacturing, dining and living areas.

Many of its streets are dedicated to a specific trade, e.g. footwear, toys, silk, bamboo, antiques, etc. (a throwback to its guild days).


The old quarter has to be the most fascinating part of Hanoi - we just loved it!

Another part of the City we explored was the French quarter.  When the French occupied Hanoi they tore down many of the old Vietnamese buildings and replaced them with elegant French style villas.  As well as the beautiful architecture, this area is characterized by wide, tree-line streets which, while still busy with traffic, are much easier to navigate than the narrow streets of the old quarter.


As we strolled through the area  many bridal couples were being photographed in front of some of  the City's fanciest hotels and restaurants which are found here.


Hanoi is a beautiful city with many lakes.  Our hotel was very close to one of them - the Ho Hoan Kiem (Lake of the Restored Sword) about which there are many legends. 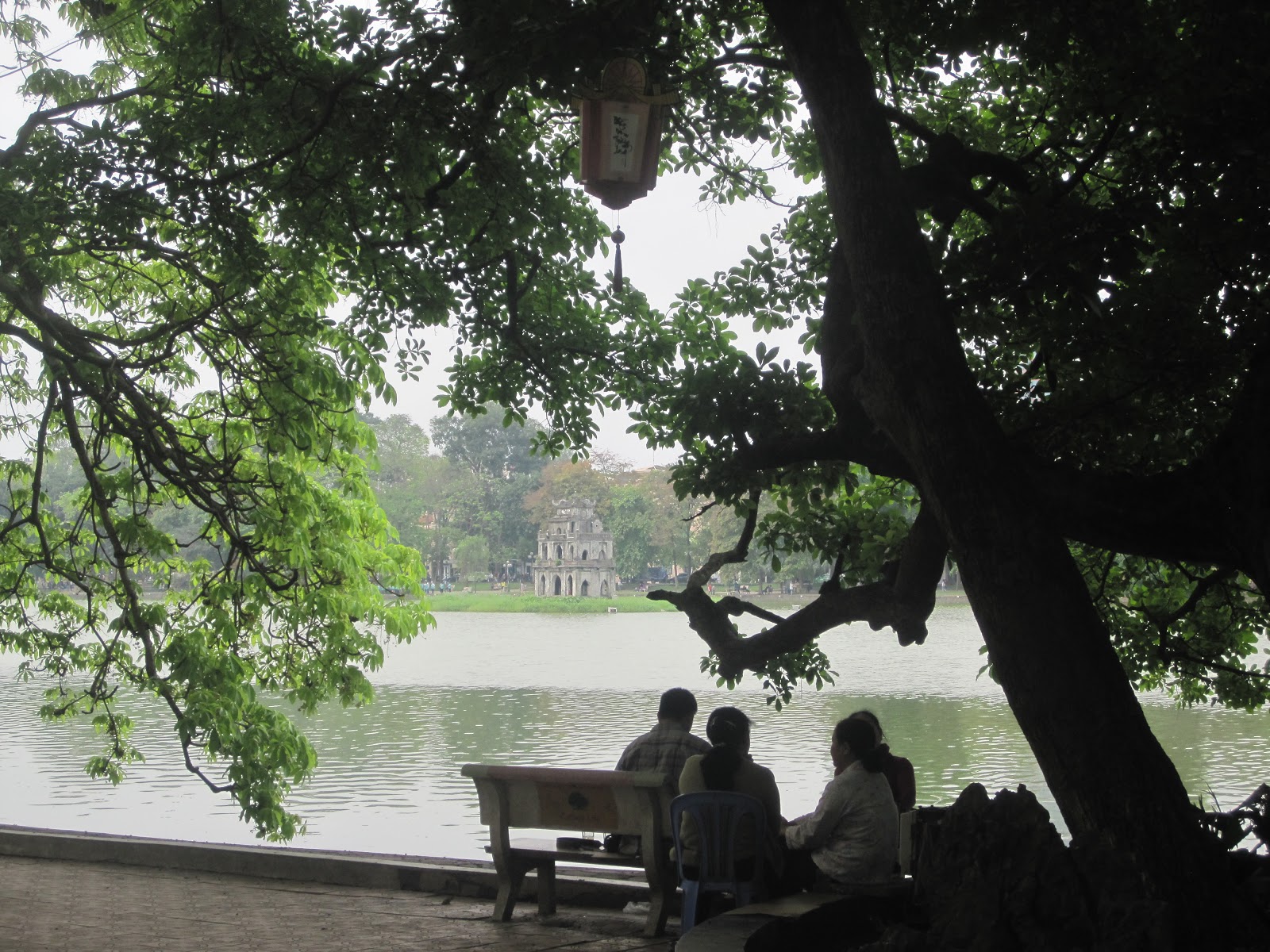 
As posted by Ingrid:

So what did we do first in Hanoi? We booked a City Tour for the next day (obviously, we had already forgotten how strenuous the Hue city tour was). So bright eyed and bushy tailed we set out at 7:30 the next morning to visit Hanoi's major attractions:
﻿﻿﻿
The Tran Quoc Pagoda:
One of the oldest pagodas in Vietnam it lies on the eastern shore of Tay Ho. The pagoda was built in the 15th century and rebuilt in 1842. Our visit coincided with a major holiday and a service took place while we visited. 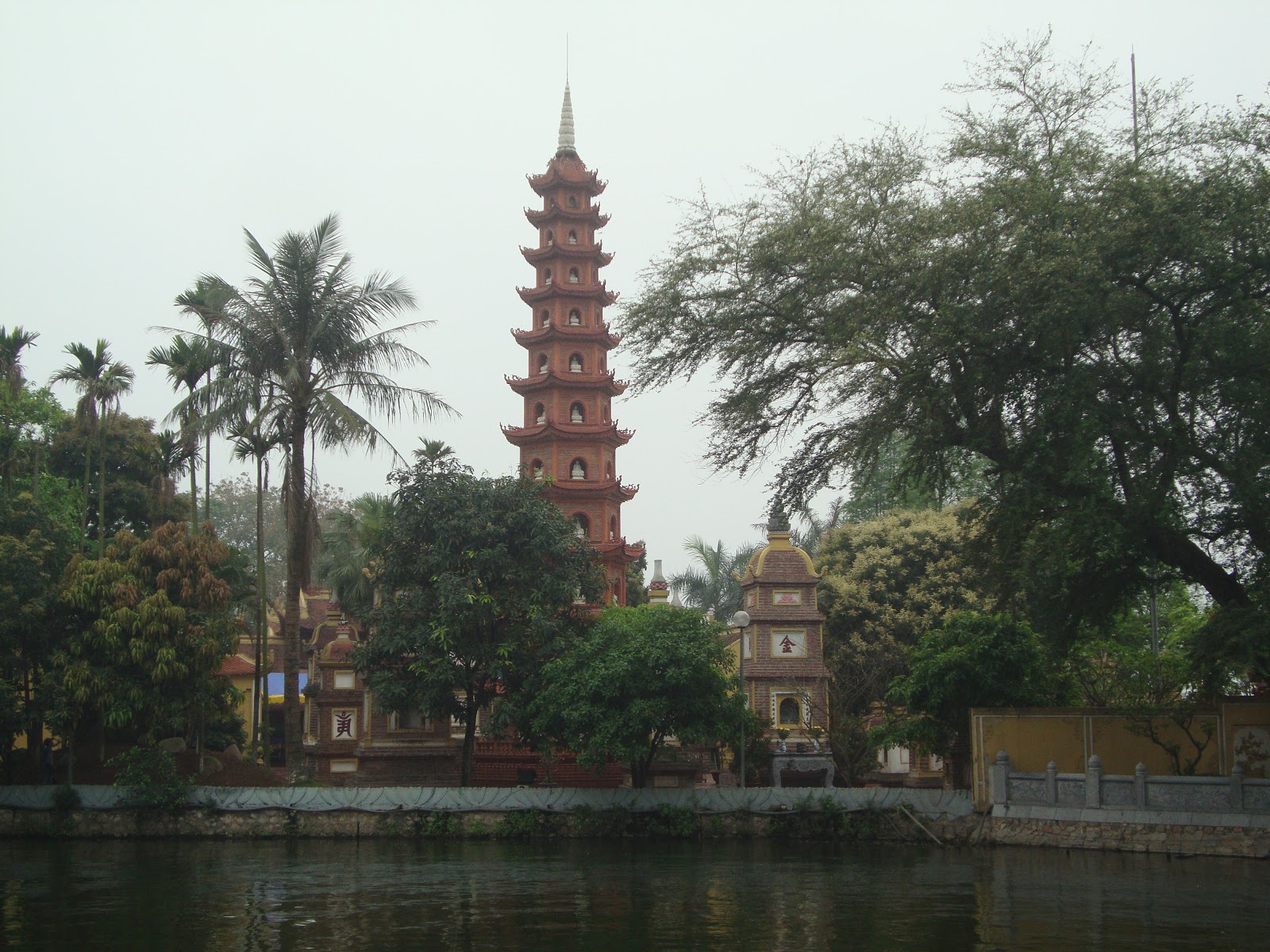 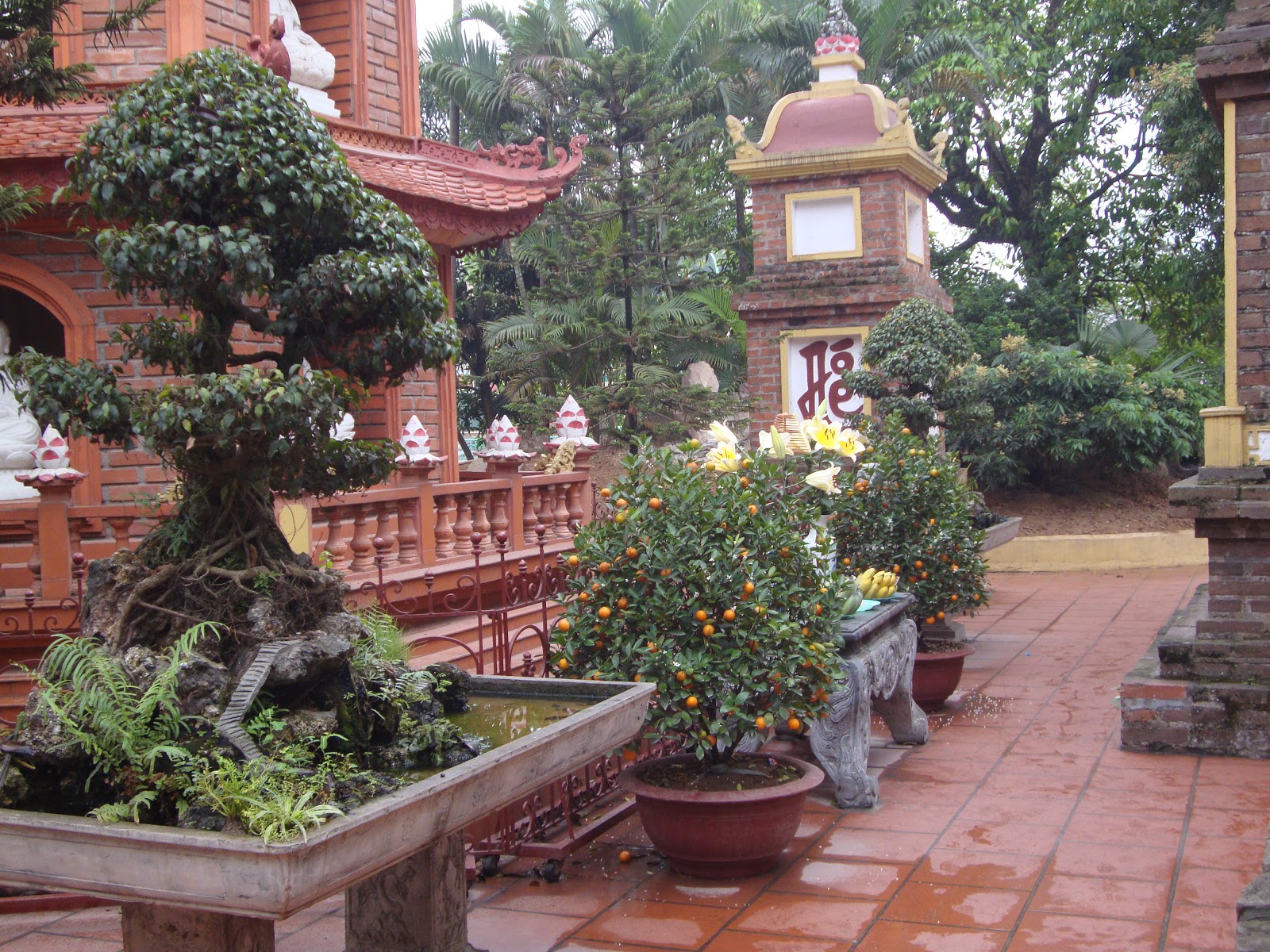 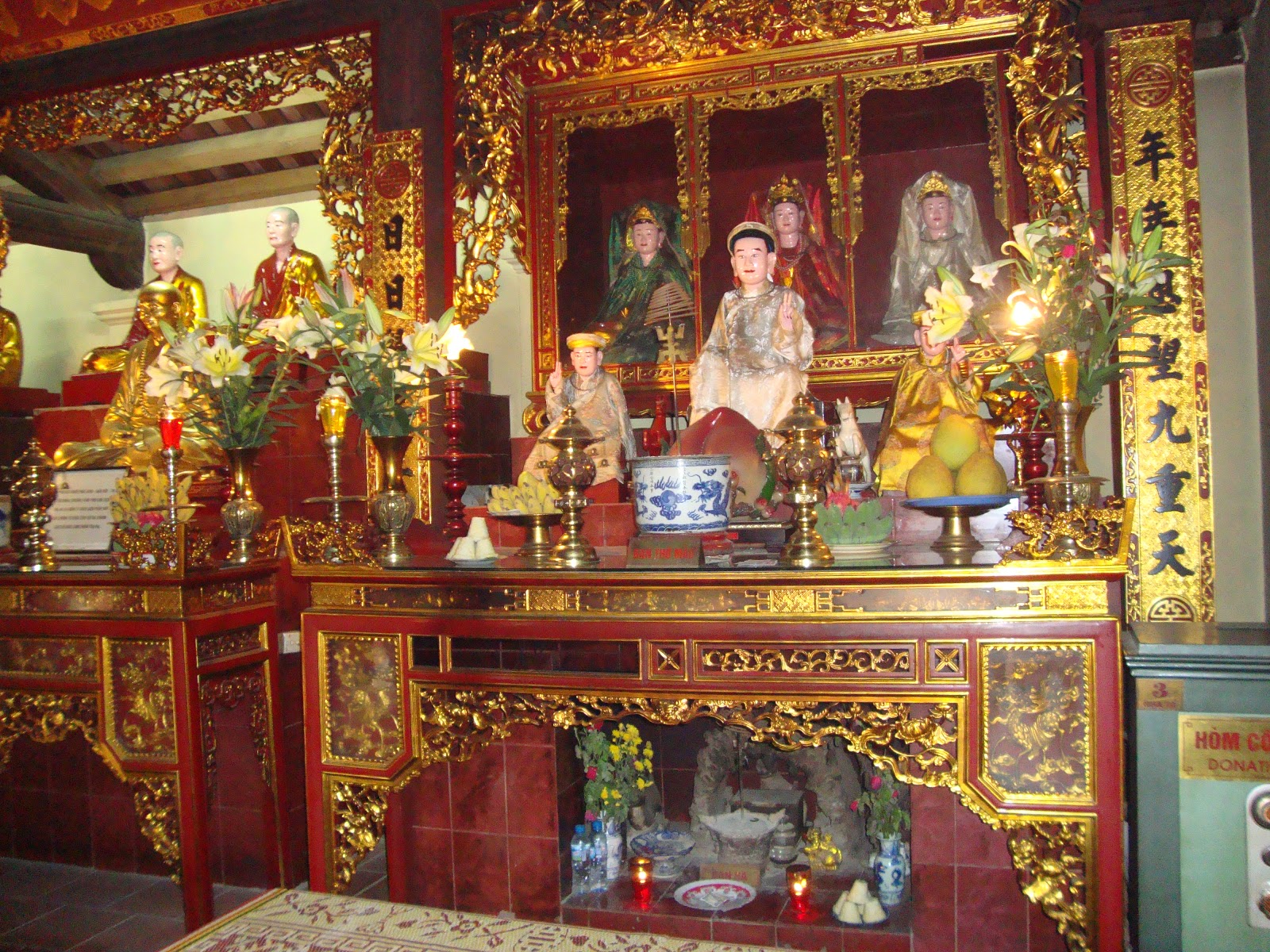 The Ho Chi Minh Mausoleum, Museum, Stilt House and One Pillar Pagoda:
The mausoleum is a monumental marble edifice. It was constructed contrary to Ho Chi Minh's desire for a simple cremation. His frail body is on display deep within the building and soldiers ensure you walk by at a brisk clip. The mausoleum is closed for about two months each year, while the embalmed body goes for maintenance. Like many places in Vietnam, taking photographs is forbidden inside. 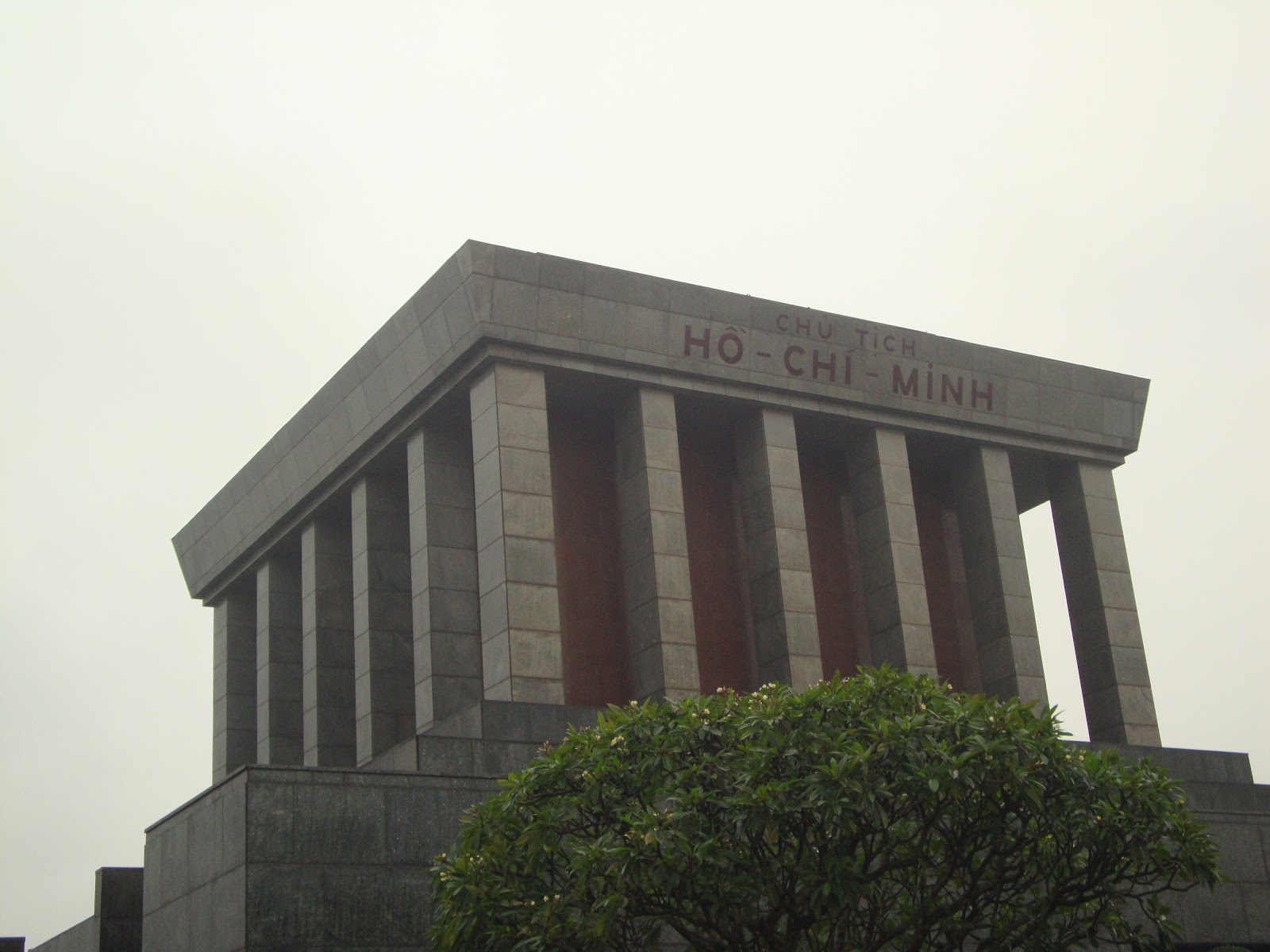 The museum next door chronicles the life of Ho Chi Minh and displays many of his writings and other mementos on his struggles to achieve independence for his country. 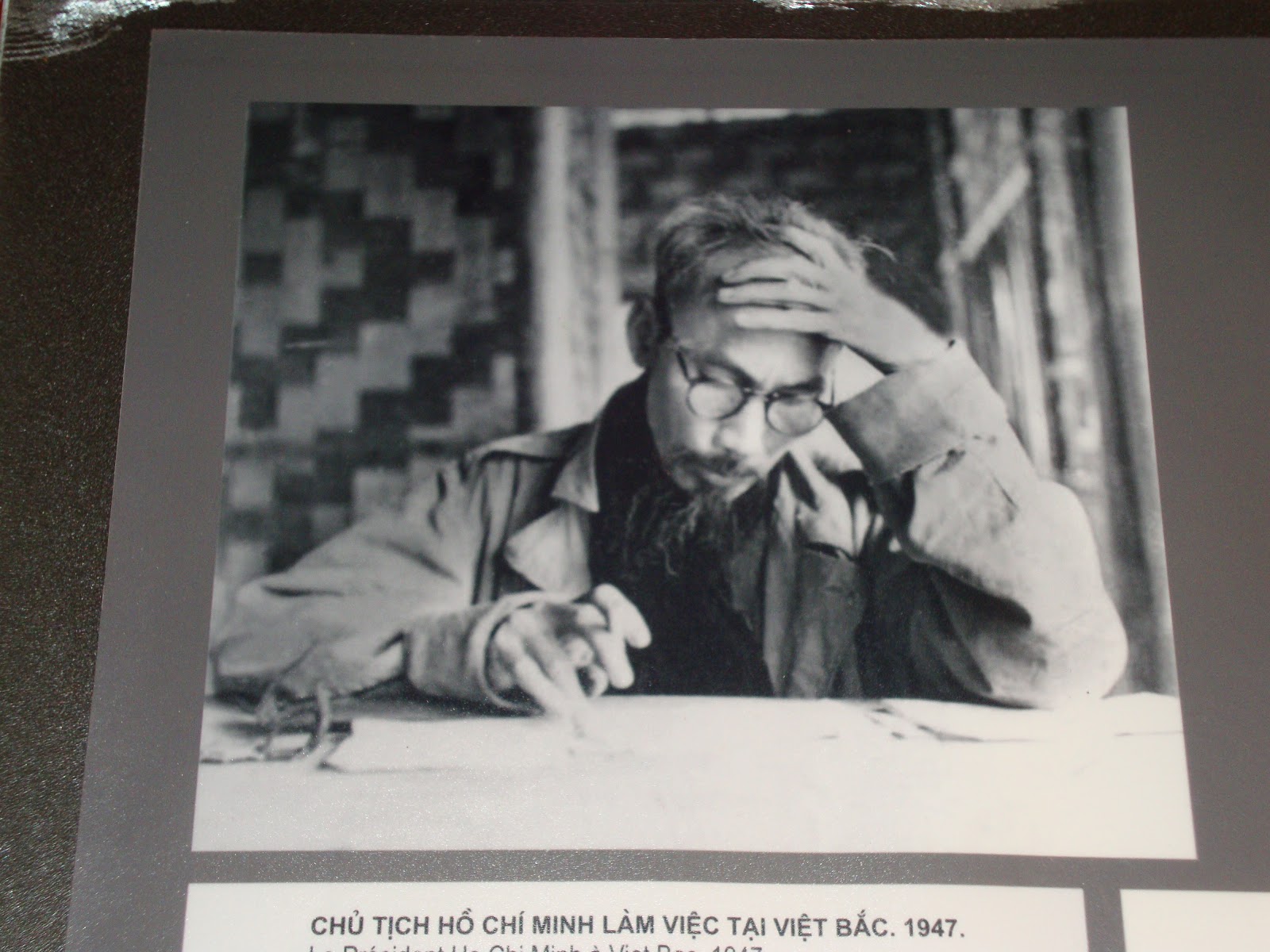 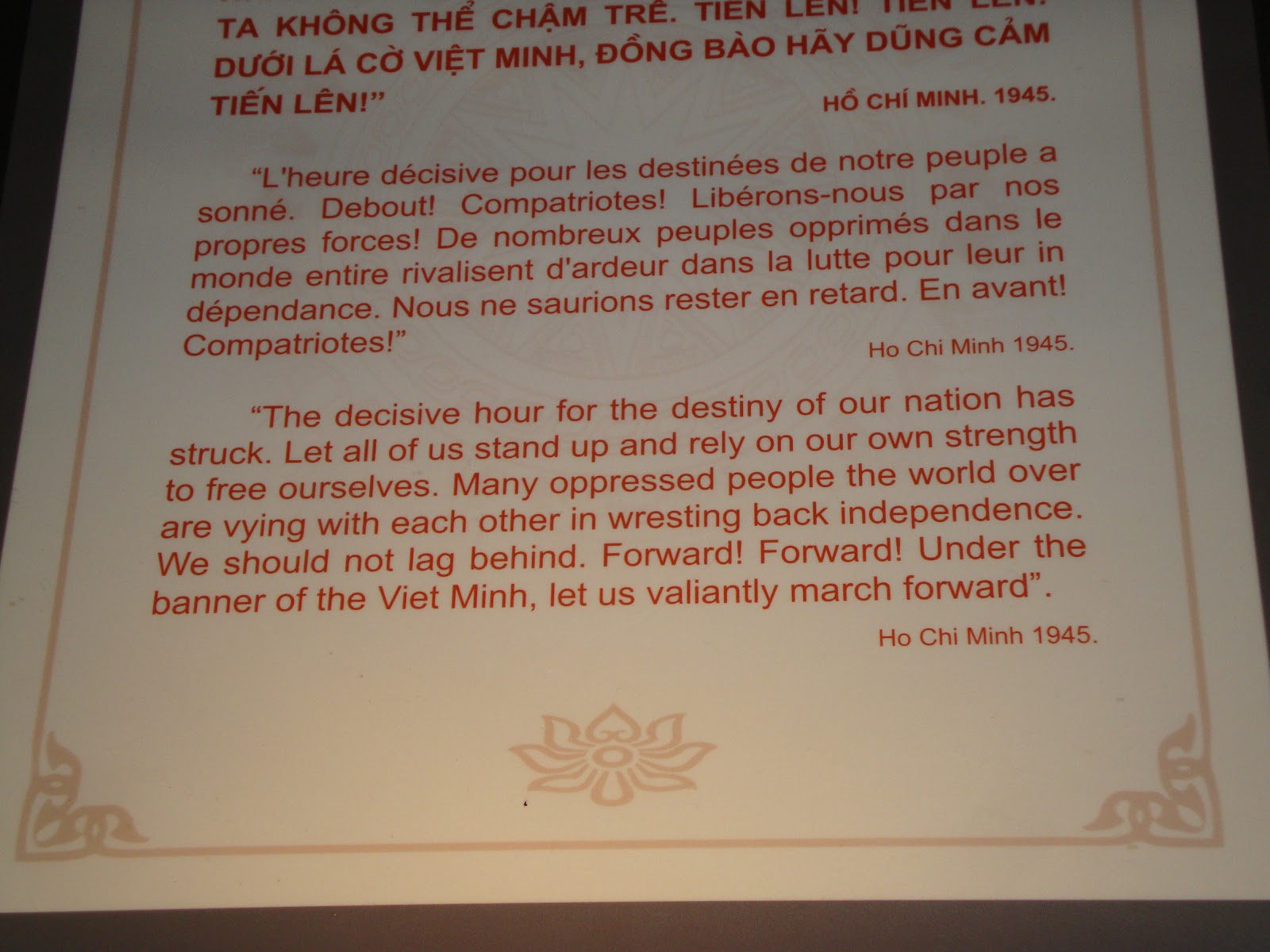 One of the most impressive parts of the complex is a humble stilt house where Ho Chi Minh lived intermittently from 1958 until his death in 1969. It escaped the American war unscathed and is left just as it was then. It sits in a well tended garden next to a carp filled pond. Seeing his work and life style, it is not hard to like the man. 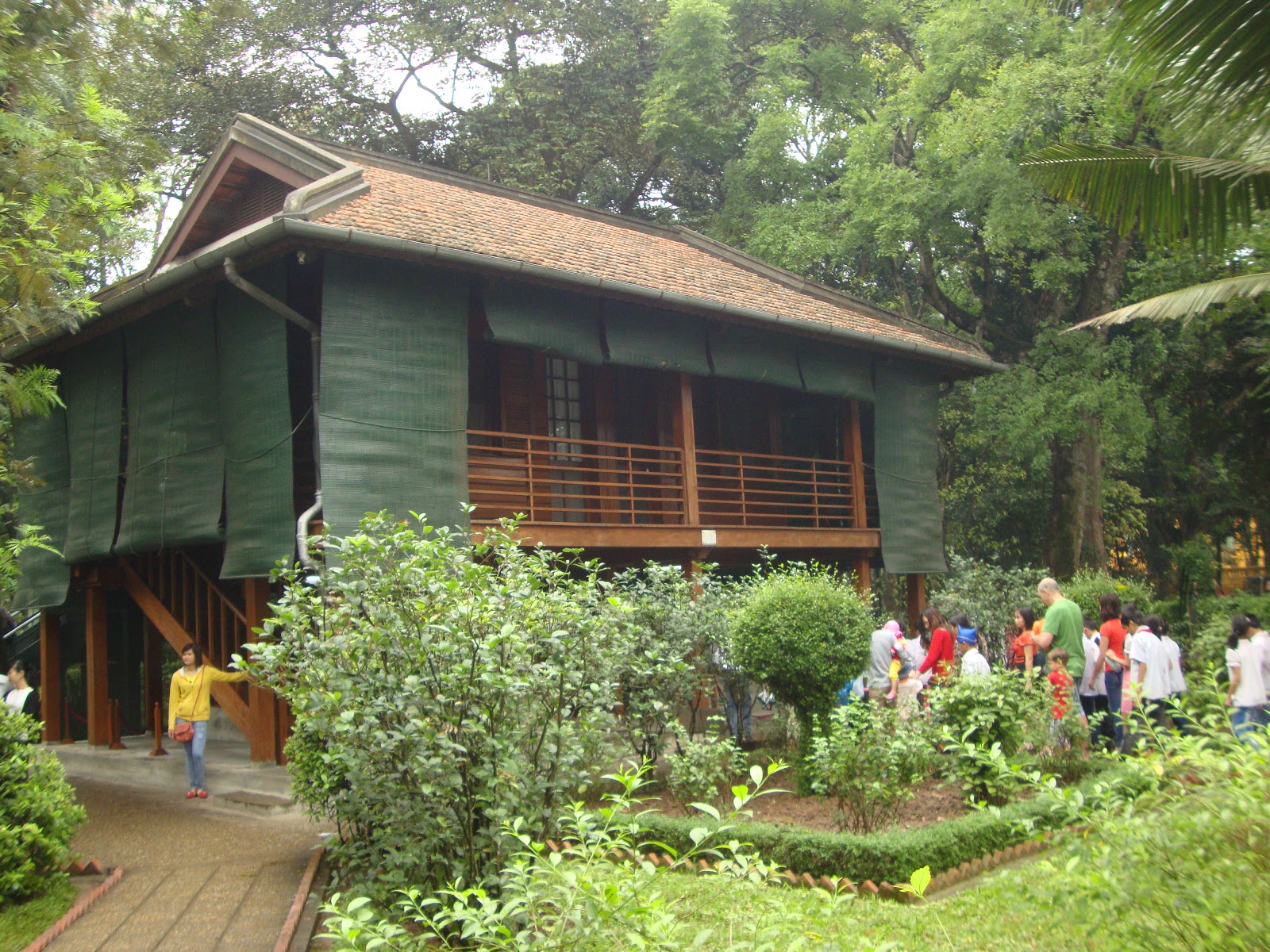 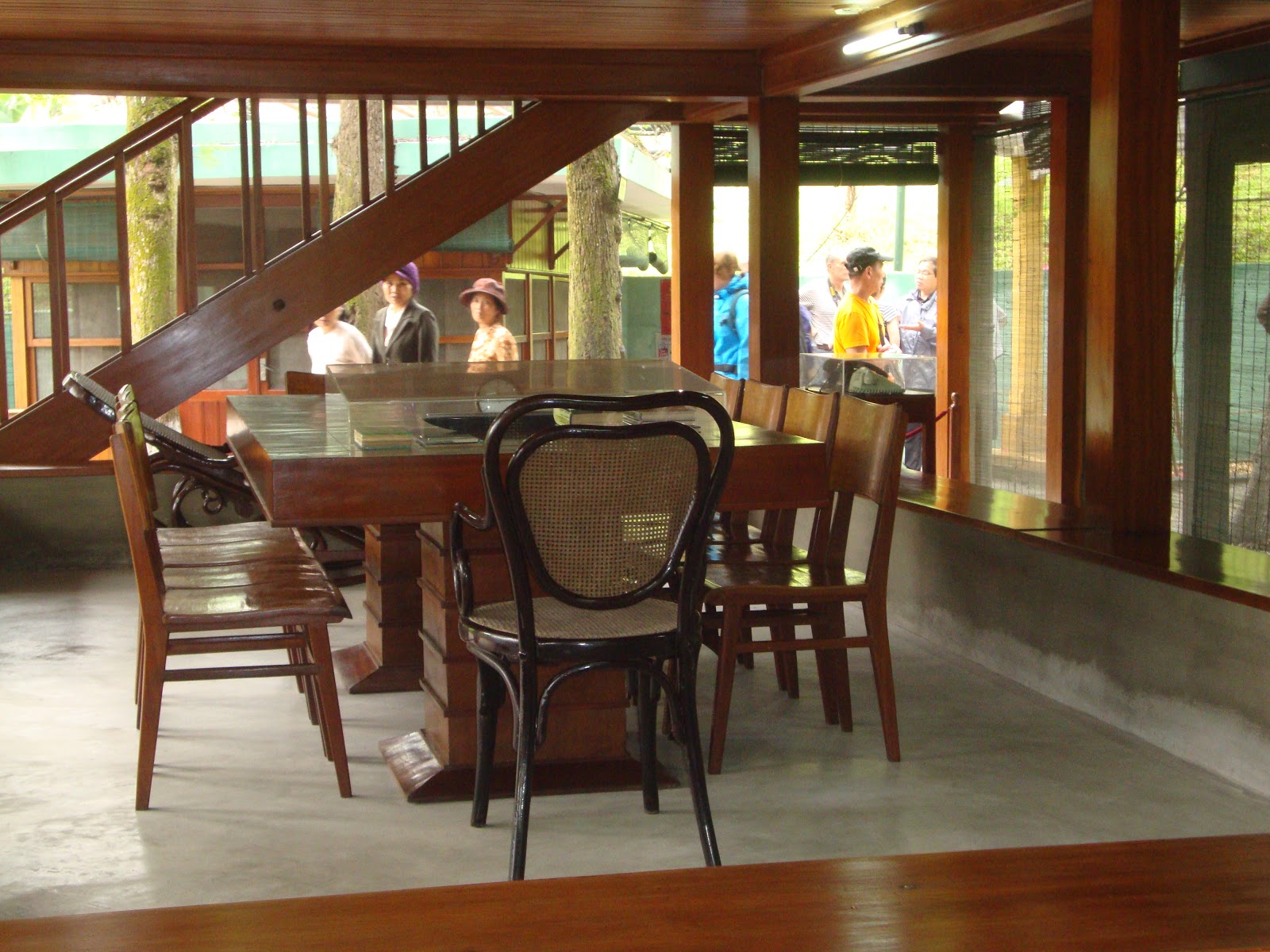 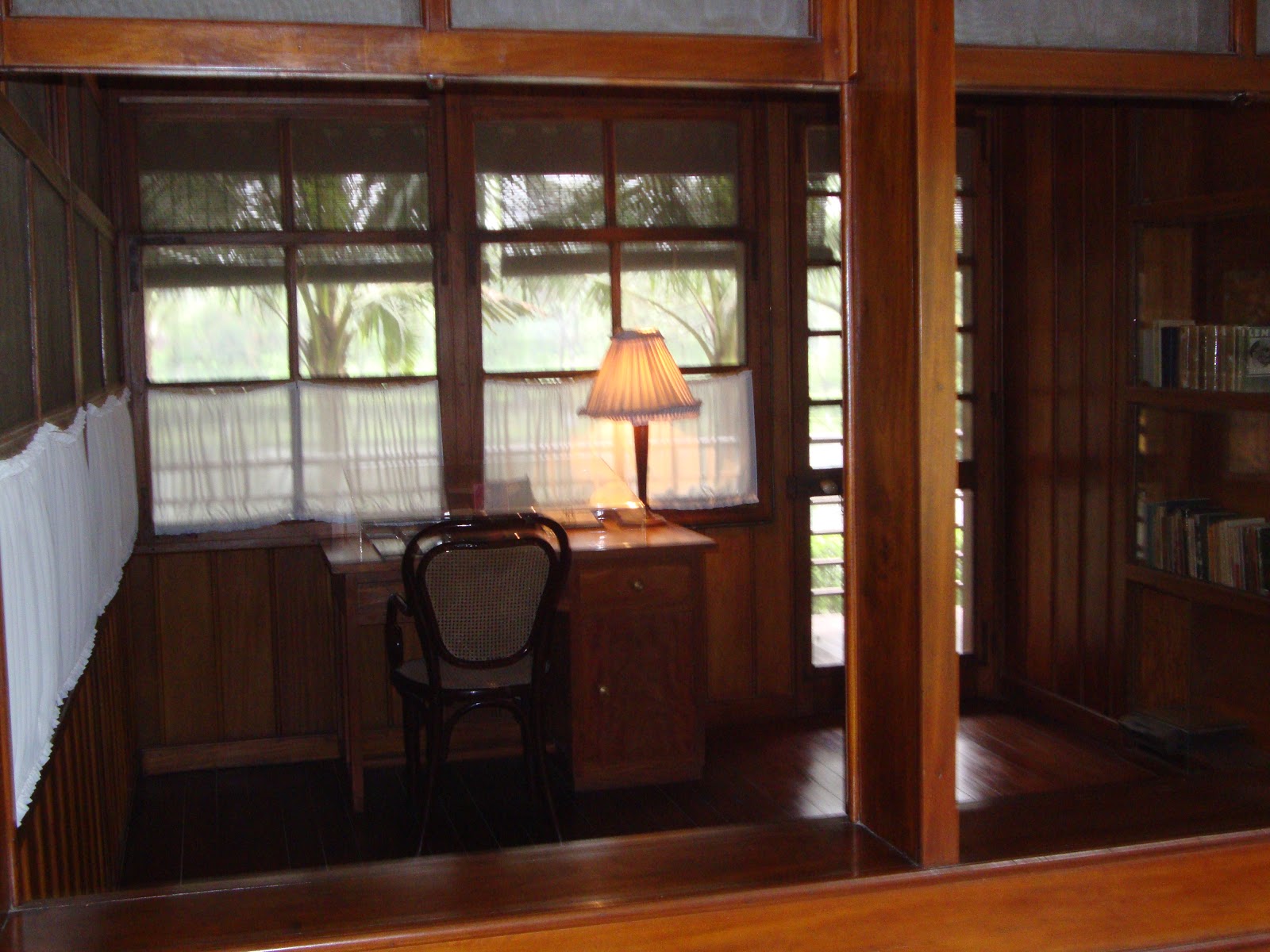 The One Pillar Pagoda, built of wood around a single stone pillar, is designed to resemble a lotus flower. It was re-built in 1954 after it was destroyed by the French upon their retreat. Vietnamese women go here to pray for fertility.....we saved ourselves the climb........ 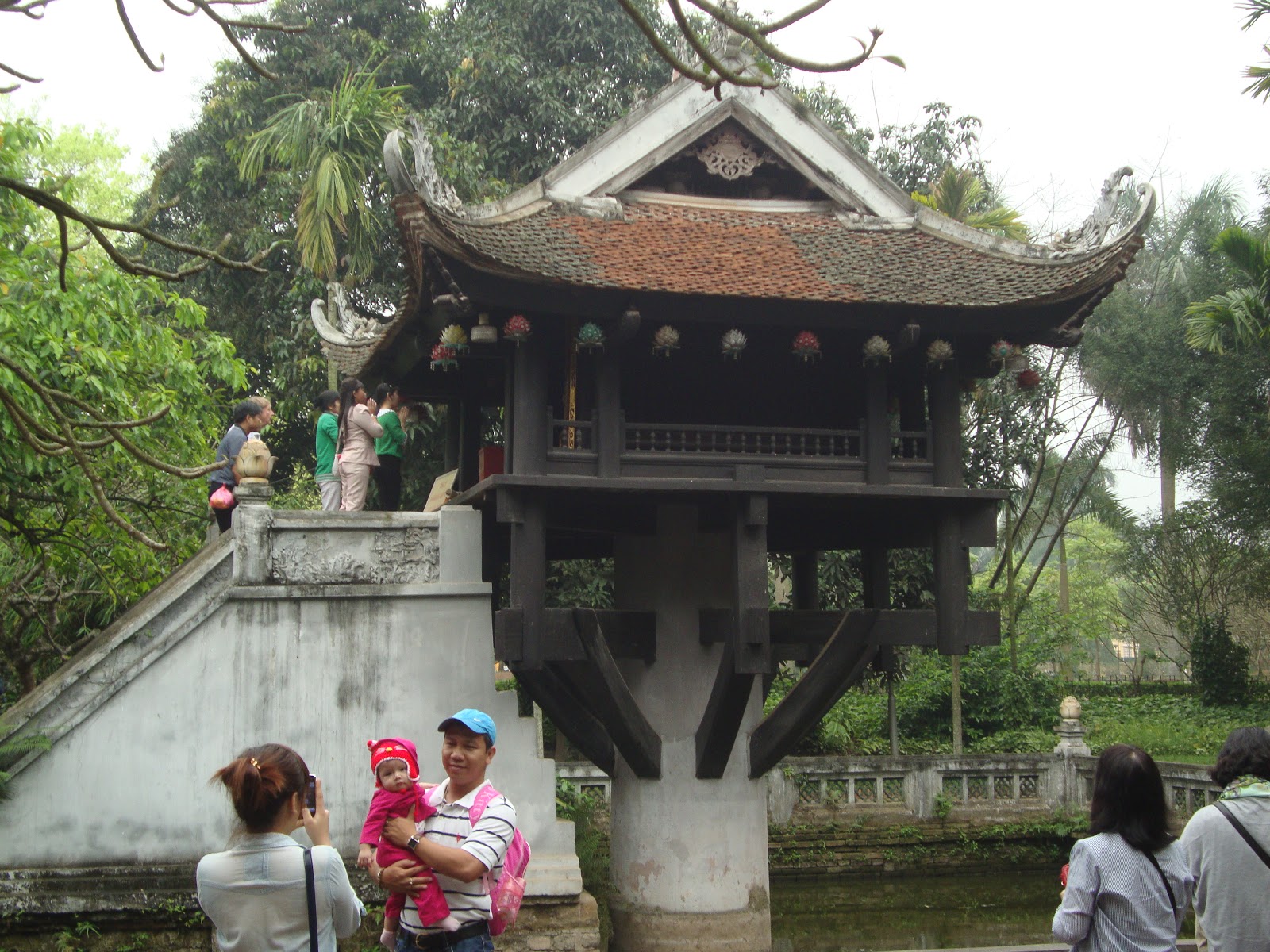 The Museum of Ethnology is one of the country's premier museums and carries a collection of tribal art and artifacts. The grounds feature traditional village houses where you can explore the inside.

The Temple of Literature, dedicated to the teachings of Confucius, was founded in 1070 and is a rare example of well-preserved traditional Vietnamese architecture. The first university was established in 1076 for the noble elite, after 1442 a more egalitarian approach was adopted and gifted students from all over Vietnam were educated here. 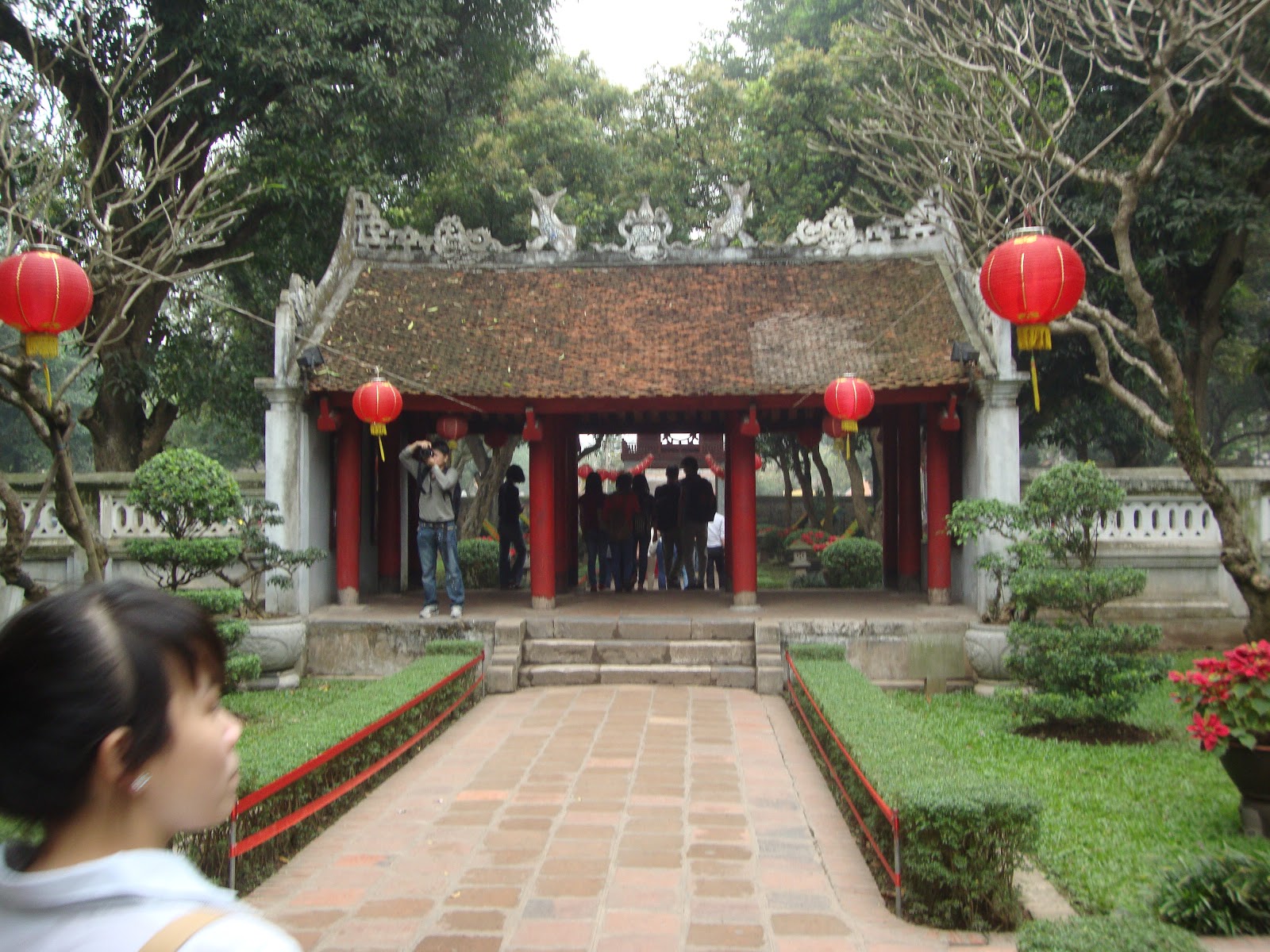 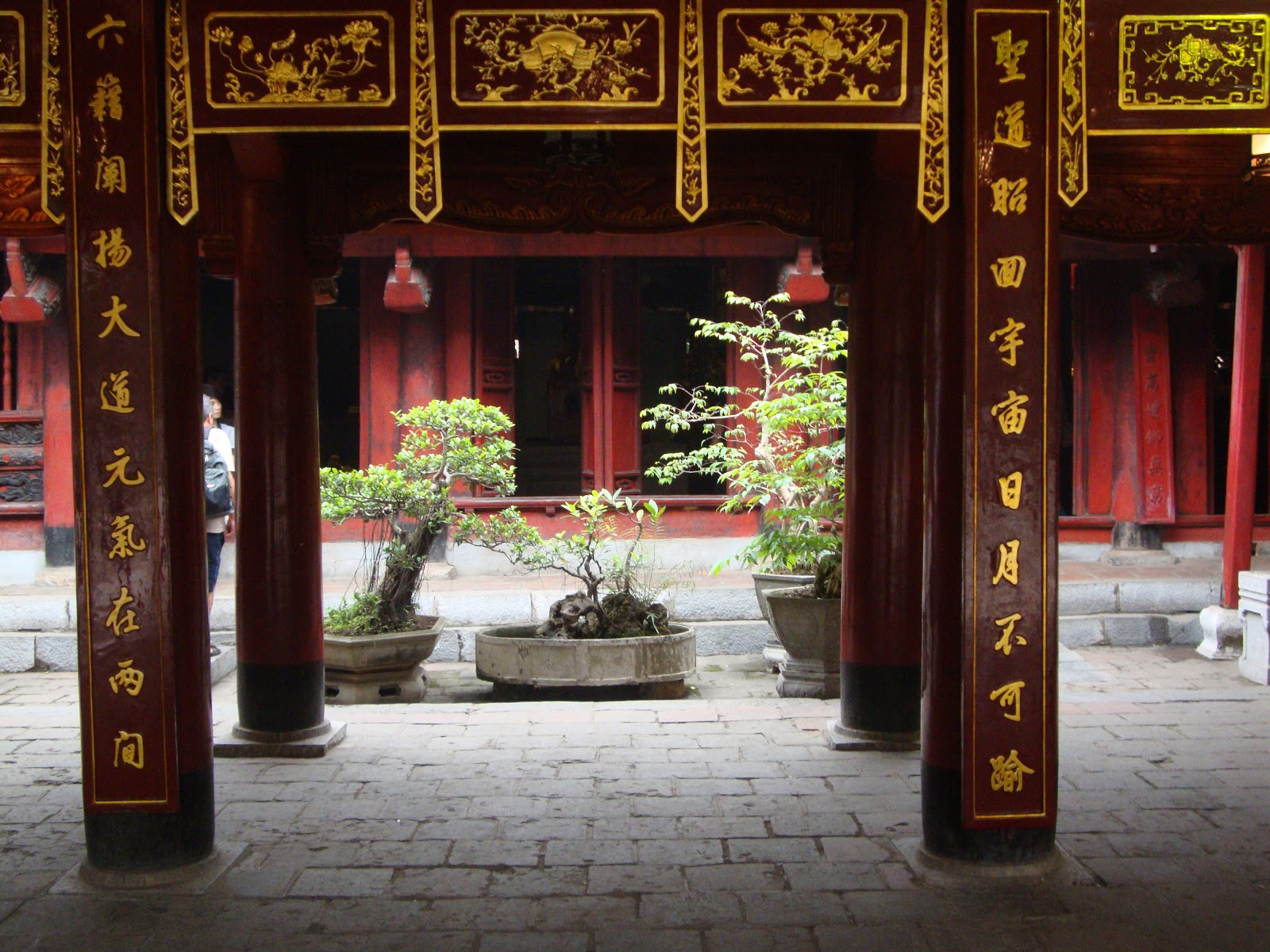 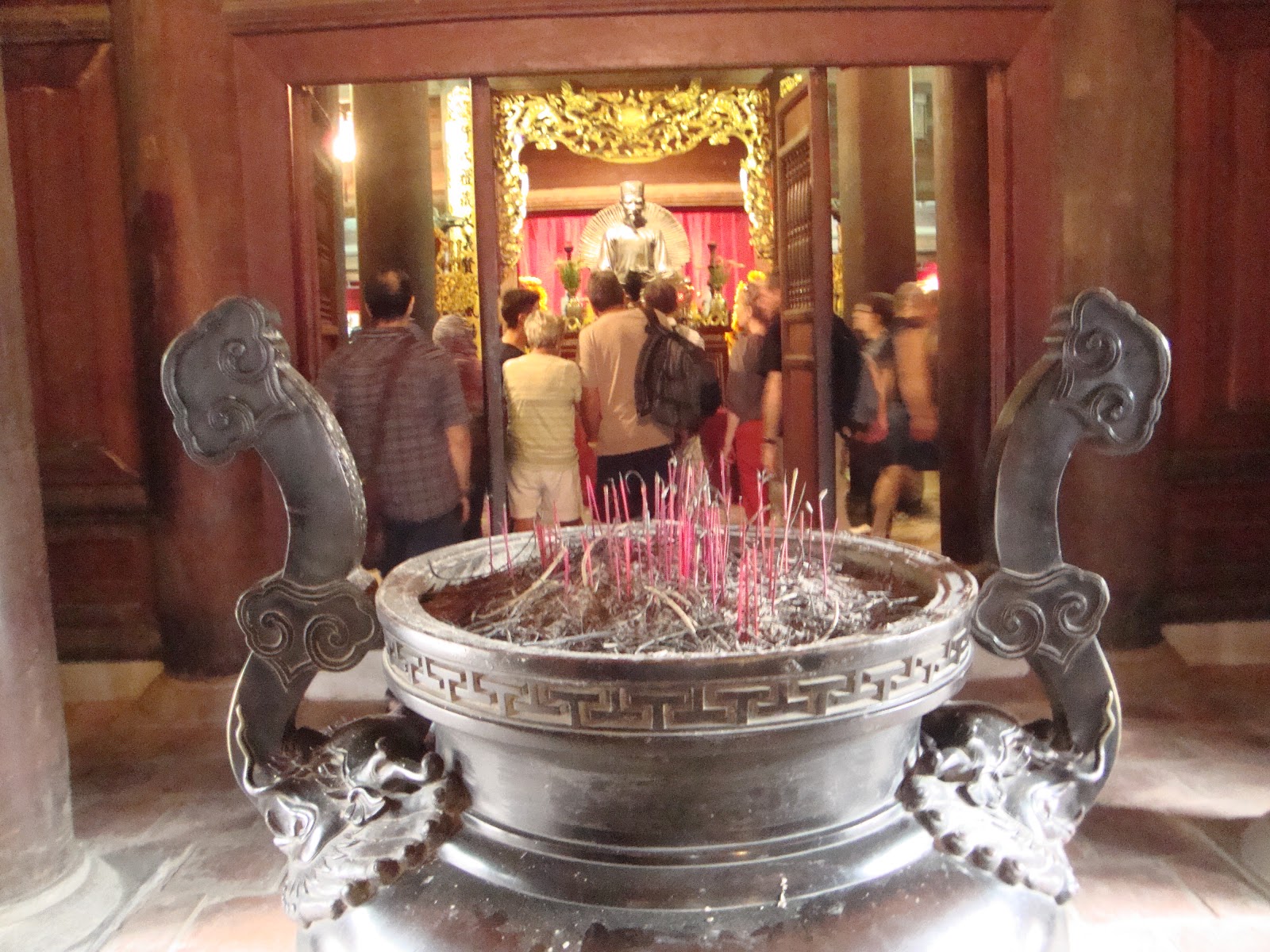 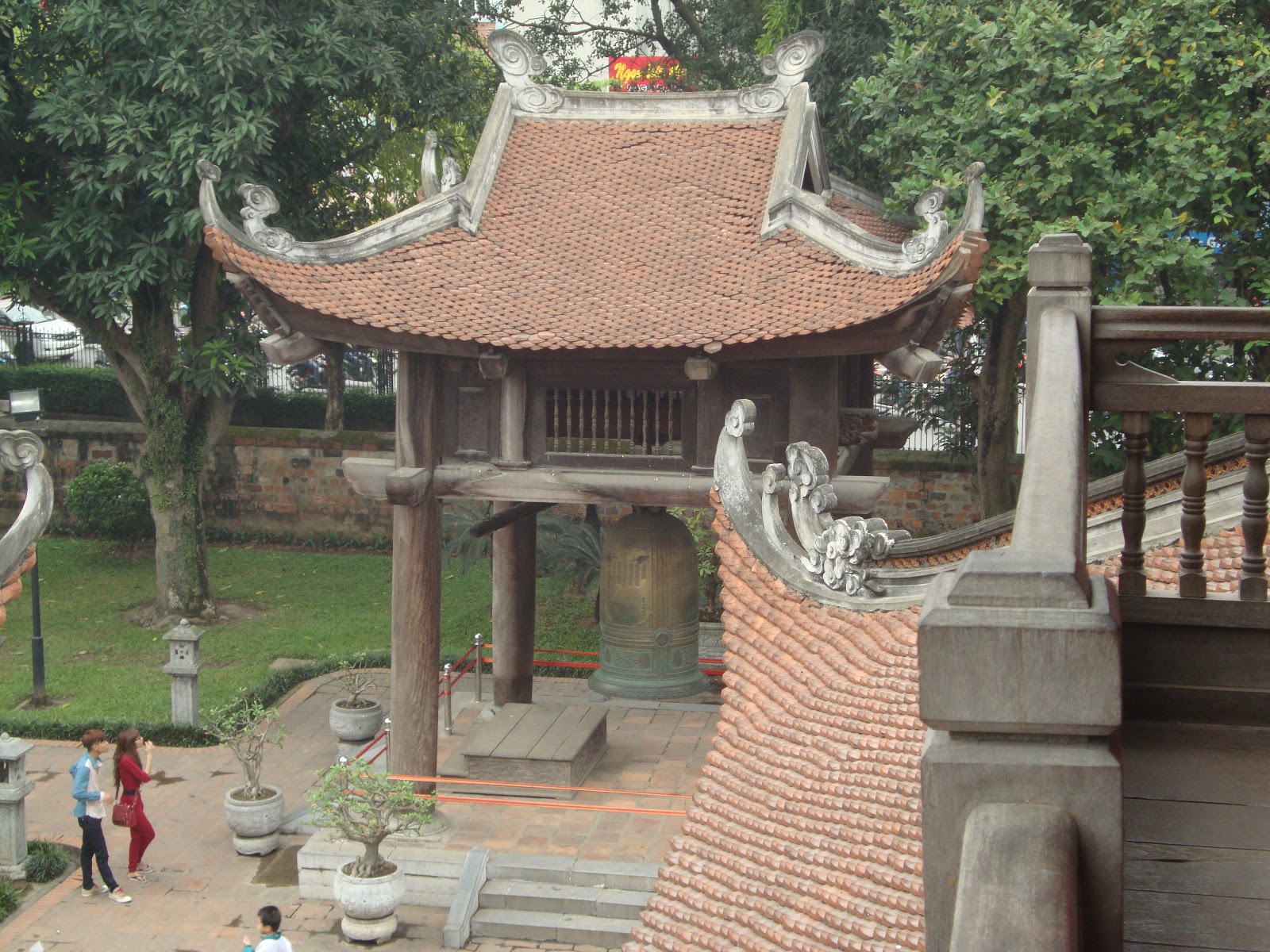 And, just to ensure that we don't get overly happy, we visited the Hoa Lo Prison. It housed Vietnamese revolutionaries during the French occupation and American pilots during the American War. Renamed by the POWs the "Hanoi Hilton", it also displays the flight suit and parachute of Senator John McCain, who  was shot down in 1967 and was a "guest" here. 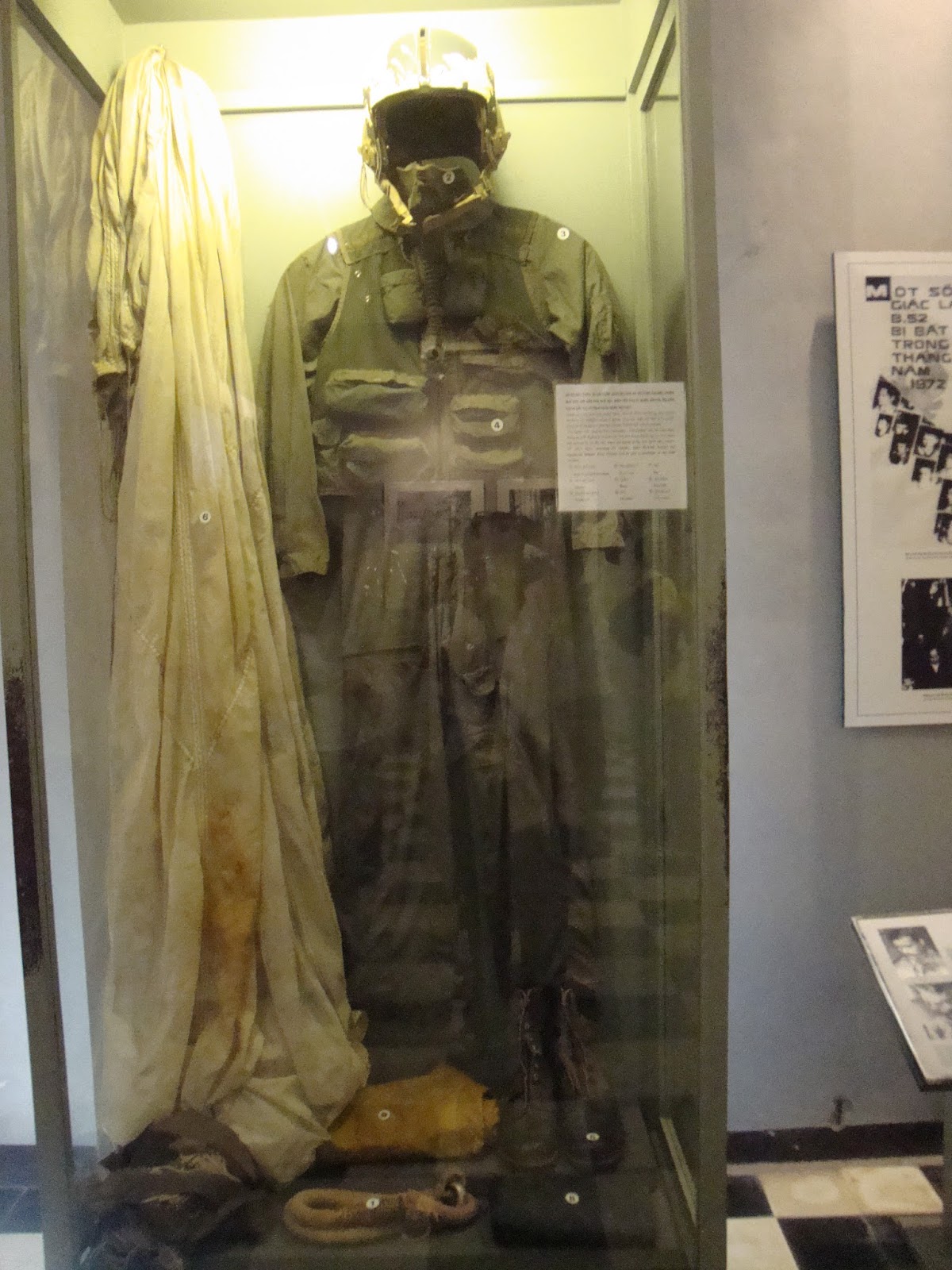 Tomorrow morning we will be travelling to Halong Bay for a two day/one night cruise.............